Speaking out about the mental health of student-athletes

SAU works to assure that students have a place to express themselves and where their mental health is at, whether that is due to sports or other circumstances. The school offers six free counseling sessions to the members of the SAU community.

For student-athletes, natural stressors accumulate as students work to balance the duties of school life and athletics. The pressure of performing well in both an academic and athletic environment, in some cases, can cause a deterioration of mental health for these athletes.

Stressors may vary from sport to sport, but they are extremely common among student-athletes. A study conducted through Northwestern University indicates that 95% of male and 85% of female athletes report higher stress compared to 52% of non-athlete students.

The same study provides information on how college athletes experience increased stress because of their sport. Stressors extended to college athletes are due to travel times, interpersonal communication issues with teammates and coaches, demanding practice times and overall team commitments.

While these challenges are presented naturally through the participation in sports, personal pressure may manifest itself in an unhealthy way. A pressure to perform at the highest personal standard possible lies dormant in many athletes that make it to the collegiate level.

“It is not uncommon for any player of any sport to be upset after a game that they lost. However, it is also not rare for a player to be upset with themselves, regardless of the outcome of the game, because of the way that they performed during the competition,” an anonymous source from Ambrose relayed. 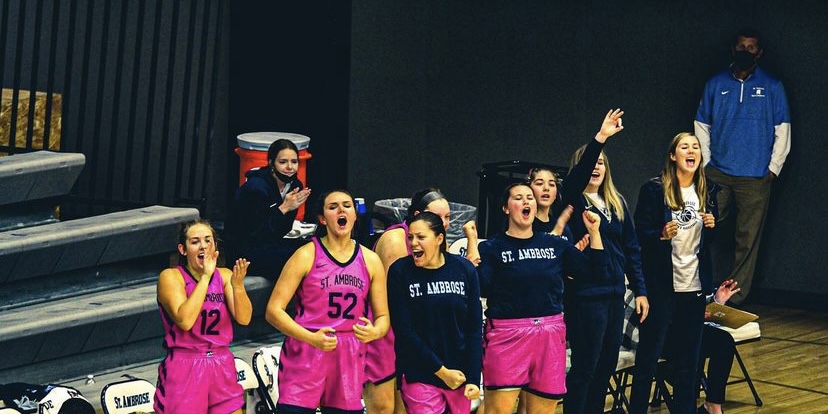 “We begin to play the game because we find joy in it. We continue to play because we get good,” longtime Ambrosian student-athlete explained. “When you don’t play well, you don’t have as much fun. When you stop having fun, it becomes a sickening stressor that you sadly may end up dreading.”

This is not an out-of-the-ordinary mindset for competitive athletes. Student-athletes are unquestionably encumbered with stress. The innate desire to play to their highest potential, an ingrained need to make a name for themselves, and to keep up with an overwhelming academic workload is no easy task.

“Have you ever heard for the phrase ‘if you’re not first, you’re last?’” asked the Ambrosian athlete.

Regardless of the level of competition a student-athlete competes at, there will always be a standard that they hope to play by. An expectation for their execution on how they play the game, objectively realistic, will loom over any player.

“It took me a while to bring myself into a positive headspace when it comes to playing the sport I love in college. I went from never coming off the field, to never starting. I suffered from injuries, mental and physical, and I lost the passion that had always ignited my love for the game,” exclaimed an Ambrose student-athlete in their final season.

Student-athlete mental health struggles are prevalent and should not be pushed to the side. It never hurts to check in on a friend, regardless of their extracurricular activities.

Do It Yourself Dorm Room Decorations

Giving back to the SAU community this ...