Teagan Conroy ’21 had a formidable experience “sailing” abroad in 2019, and it inspired her to live true to the Ambrosian value of “enriching lives so that they may enrich the lives of others.”

For her Study Abroad adventure, Conroy joined Semester at Sea (SAS), a study abroad program aboard a 7-deck ship. Students learn, visit and serve multiple countries during one semester. Conroy flew to Amsterdam September 4, 2019, and boarded the SAS ocean vessel September 9. More than two months later, she had visited 13 countries on four continents, finally disembarking in the U.S. on December 23.

“Ghana is a country that I had been dreaming of going to since I first learned about it when I was 11 years old,” Conroy said. “Going there was everything I dreamed of and more.”

Her group’s destination was the small, rural village of Senase, where they spent four days and Conroy had one of her most memorable experiences.

Conroy and her host mom, Janet, walked around the village every day, cooked breakfast for the school (Semanhyiya American School) in the mornings and shared stories every evening on her porch.

Conroy, an elementary education major, was able to teach a few lessons to a fourth grade class at the school. She also visited the coastal Slave Castles where the Atlantic Slave Trade began.

Over those four days, Conroy developed a close relationship with Janet, so the two women kept in touch over the past year. It wasn’t until earlier this month that Conroy learned Janet needed her help.

Janet had been working on completing a teaching certificate, but didn’t have the funds – 3,000 Ghanaian Cedi (about $515 in U.S. Dollars) – to take one final class. When Conroy learned about Janet’s plight, the Ambrosian sprang into action.

“I texted my closest group of friends from SAS and when all eight of them donated, I knew it was something that more people would be interested in donating to,” Conroy said. “So I posted Janet’s story on my Instagram and Snapchat story and added a link to my Venmo in case anyone wanted to contribute. It was a shot in the dark, but I was hoping someone would help. To my surprise, not only did people help, but they started sharing Janet’s story to their friends too!” 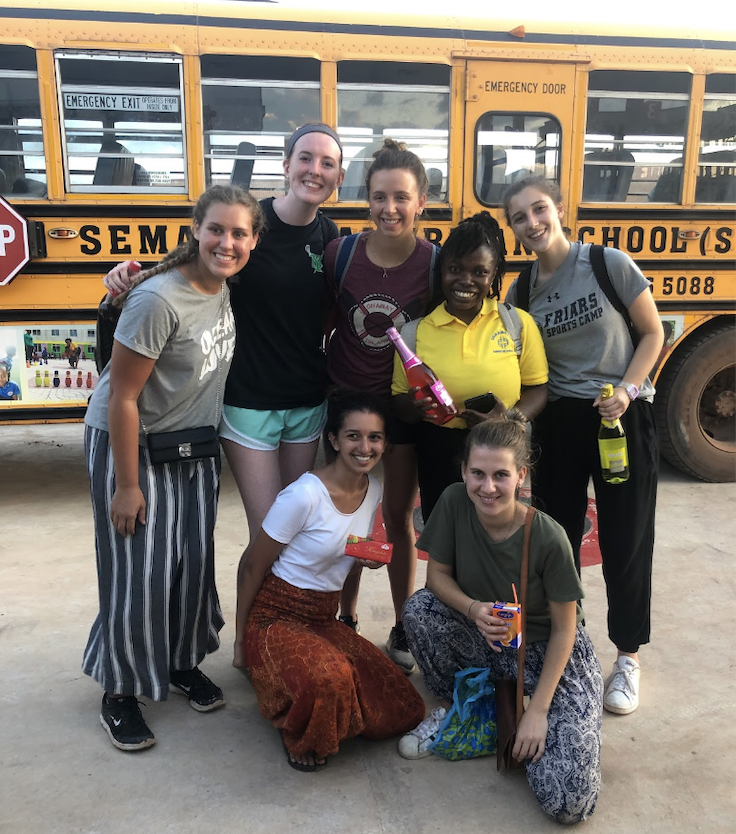 Photo courtesy: Conroy. “These are the people from SAS who were assigned to Janet’s house with me! Janet is also in this picture in the yellow shirt! She is holding non-alcoholic champagne used to celebrate special occasions!”

After only three days of spreading the word, Conroy had exceeded her goal: She raised $1130.19 USD!

“I honestly did not think I would ever reach that amount, and Janet was only expecting to receive about $10 to $20,” Conroy said.

Janet is now enrolling in the last class she needs for her teaching degree and plans on using the remaining money for food, books and transportation to class.

Conroy’s fundraising has since been shared on social media by her mom Kitty (Murray) Conroy ’90.

“This is a proud mom alert,” Kitty Conroy wrote. “This girl is making a difference.” 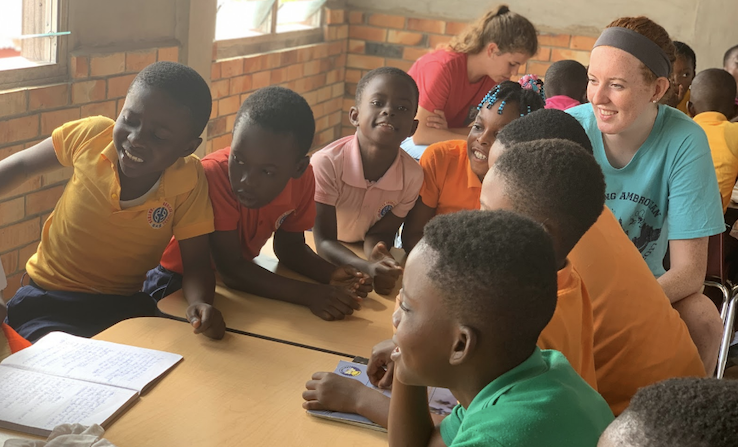 Photo courtesy: Conroy. “This is me in a sixth-grade classroom with students at the private school. We were working on a Reading project.”

But Conroy’s compassion did not stop there.

Conroy and her SAS friend Reeva Kedia began learning about pre-teen girls (4th and 5th graders) in the village who did not have access to menstruation supplies. (This inadequacy is coined as “period poverty.”) 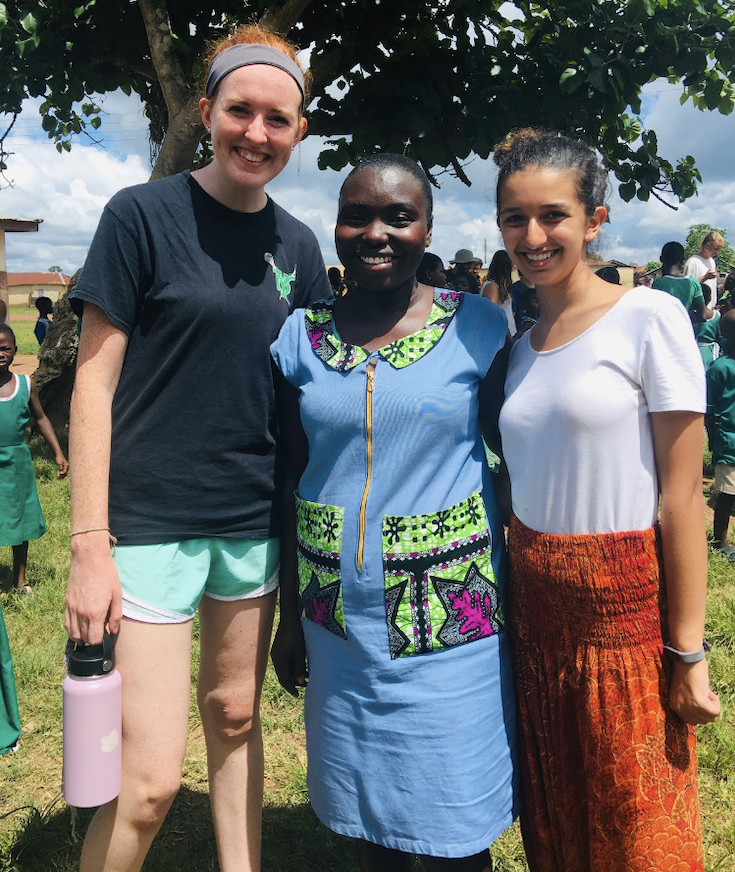 Photo courtesy: Conroy. “From left to right: Teagan Conroy, Ellen, Reeva. Ellen is the fourth-grade public school teacher who helped bring us to purchase pads for the entire grade at her school. She has been helping us come up with a sustainable plan for the village!”

“(A teacher) told us that girls as young as fourth grade were dropping out of school from embarrassment for getting their period and not having the menstrual products to take care of it,” Conroy said. “She also told us that students were left with no choice than to seek out relationships with middle aged men from the village in exchange for pads. Some of those girls unfortunately have gotten pregnant, and have had to drop out of school as a result. This could all be prevented if they just had pads!”

Conroy (left) and Kedia (right) started gathering money that same day from people they were traveling with. As a result, they had enough money to buy nearly 500 pads. Although it was a quick relief, they wanted a more sustainable, long-term solution.

With help from Lizzie Mafrici, another friend from SAS, the three women have since developed a plan to lessen the effects of period poverty in the Senase village’s. They are currently accepting donations here and have a fundraising goal of $3,000.

Conroy hopes others that hear her story recognize the change they have the potential to make outside of themselves.

“You would be surprised what you can learn by just listening to other people’s stories,” Conroy said. “Ghana taught me important life lessons, connected me to the most amazing people, and has one of the most incredible cultures. I cannot wait for the day I can go back and reunite with them.”

From students for students: Tips to succeed ...

Carly Miller is a senior at St. Ambrose University double majoring in public relations & strategic communications and multimedia journalism with minors in electronic production, graphic design, and management. She is from the Bloomington-Normal area. She hopes to work in public relations after graduation.