Opening night of She Kills Monsters 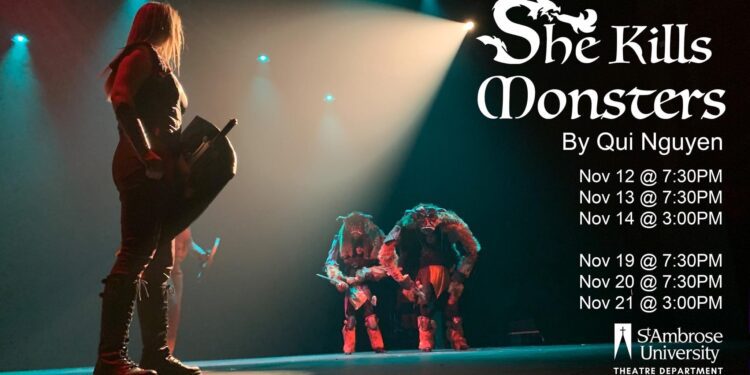 The St. Ambrose Theatre department opened “She Kills Monsters” by Qui Nguyen, the weekend of Nov. 12. This is the first mainstage production of the department’s season.

“I think we had about a hundred people per show,” said SAU senior Becky Meissen. “It was a pretty good turnout for the first week. I hope we have more people next weekend as well.”

Meissen, who plays the role of Tilly Evans, says that there were many different kinds of rehearsals that had to take place before opening night.

“There are a lot of fight scenes in this show,” Meissen said. “Like you would have choreography for a dance, we had choreography for our fights. And a majority of our rehearsals were dedicated to running through those fights.”

Another SAU senior, K. Hampton, who plays the role of Agnus, says that leading up to opening night, they faced some challenges.

“We had a longer tech process than we typically do,” Hampton said. “It was kind of nervewracking because there was a new element of the show that was added every day. We couldn’t finish everything in one day, which is kind of typical.”

In addition to Meissen and Hampton, this show also features many familiar faced to the Allaert stage. But there are some fresh faces added into the mix as well.

“Being involved with this group of people has been a really cool experience,” Hampton said. “We had a lot of people who were first years or have never been in a show before. It is cool to see how we have learned and progressed together.”

When opening night finally arrived, there were some unexpected emotions felt by both Meissen and Hampton.

“I was really excited,” Meissen said. “But I was also nervous, I was hoping nothing would go wrong but I think that was just opening night jitters. I think everyone gets that way.”

“On opening night I felt weirdly calm,” Hampton said. “ Usually I am very nervous but this show it didn’t feel like that because it is such a fun show to do.”

Meissen is not typically on stage during a production. This was a great chance for her to come out of her shell.

“I had people come up to me after the show and say ‘I didn’t know you act’ because I do a lot of backstage and tech work,” Messien said. “It was nice to be on stage and be able to get recognized for doing a good job.”

Hampton says she has really enjoyed being a part of this production, and she hopes more people will see the show.

“Honestly, it’s just fun. Like it is entertaining, if you have nothing to do and you just want to be entertained, you will be entertained if you come to see this show,” Hampton said. “There are moments of comedy, moments of drama, there are really good technical elements involved. I’ve heard from a couple of people who have seen this show, done by other theaters, that we are the best production of this show that they have seen.”

This production continues its run this weekend in the Allaert Auditorium at the Galvin Fine Arts Center. The final performance is on Nov. 21. You can purchase tickets here.

Katie Link is a junior at St. Ambrose University from Dubuque, Iowa. She is majoring in multimedia journalism with a minor in marketing and she hopes to one day write for a magazine and work with social media.